Table I. Number of animals

Figure 1: Culture model using embryonic chick chondrocytes. Chondrocytes were dissected from the upper sternum (US) and lower sternum (LS) of 14-day chick embryos, cultured in monolayer and treated with retinoic acid (RA) at different concentrations (10, 35, and 100 nM) to induce chondrocyte maturation. Photomicrographs of cells show a dose-dependent increase in alkaline phosphatase activity (increase in red color) only on US chondrocytes. LS chondrocytes did not respond to RA nor undergo maturation, and therefore, were used as controls in our studies of maturation-dependent events.

Figure 2: Dynamic loading effect on chondrocyte proliferation, differentiation and survival, in vitro. To study the effect of dynamic loading on chondrocyte proliferation, cultures isolated from the lower (LS) or upper (US) sternum were treated with 35 nM RA (35) or vehicle (0) in the absence (Static Load) or presence (Dynamic Load) of low-magnitude, high frequency dynamic loading. Dynamic loading was applied every day for 5 minutes. (A) Chondrocytes were harvested after 5 days and DNA concentration was determined. (B) To investigate the effect of dynamic loading on chondrocyte differentiation, alkaline phosphatase activity was measured spectrophotometrically in cell cultures after 5 days, and normalized to the total DNA content of each sample. (C) Chondrocytes survival was measured after 5 days by a quantitative colorimetric assay using MTT Cell Proliferation Assay Kit. Results are presented as percentage of Control (no load) for the same RA concentration. Values represent the mean + SEM of four different experiments with three replicate cultured cells in each group. * Statistically significant differences between groups (p> 0.05). 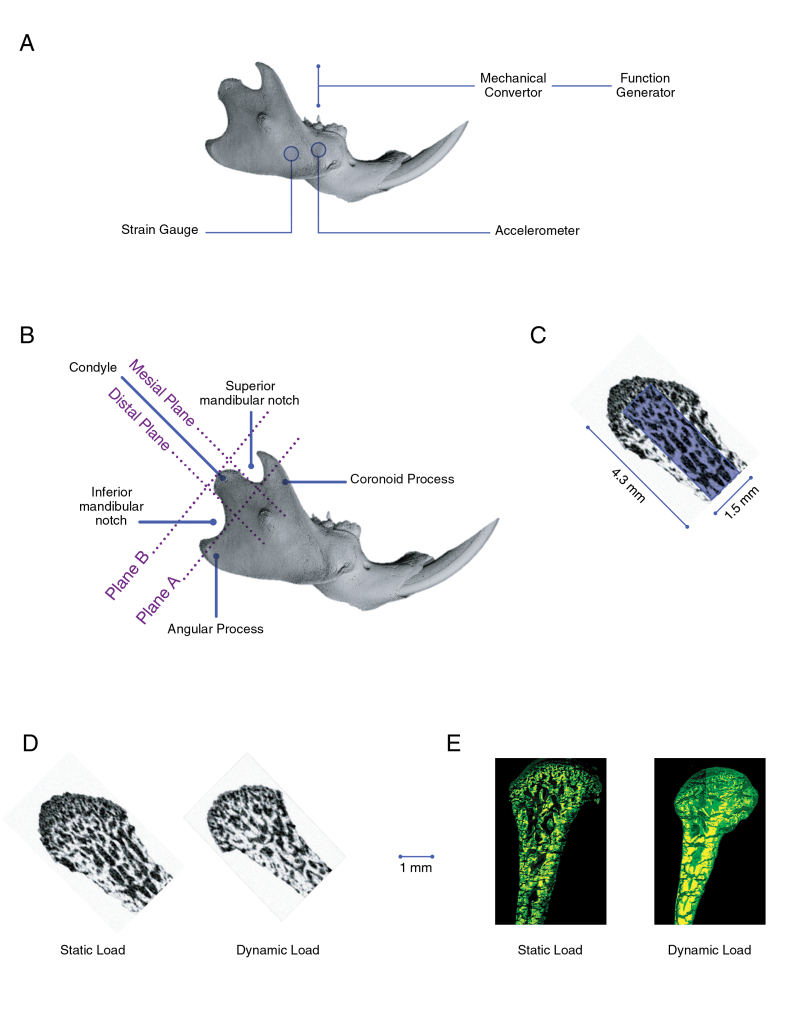 Figure 3: In vivo experimental model shows condyle response to dynamic loading. A low-magnitude, high-frequency dynamic load (120 Hz, 0.3 peak resultant acceleration, 20 µm displacement and 30 µε) was applied to the lower right molars for 5 minutes per day, for different time periods. (A) Schematic shows the location of the strain gauge and accelerometer that allowed the evaluation of micro-strain and acceleration on the alveolar bone. (B) Region of Interest (ROI) where the condylar bone quantity and quality were evaluated was limited inferiorly by a plane passing through the apex of the superior mandibular notch and inferior mandibular notch (Plane A) and superiorly by a plane parallel to the Inferior plane passing through the apex of the condyle (Plane B). From the mesial and distal side, a plane perpendicular to the inferior plane and tangent to the mesial and distal surfaces of the condyle define the limits of the ROI. (C) Bone parameters were measured in a rectangular area (inside purple rectangle) of approximately 4.3 x 1.5 mm. (D) 3-D reconstructed µCT images of the condylar process of Dynamic Load or Static Load groups collected at 28 days. Note the marked increase in bone density in the Dynamic load group. (E) Fluorescence microscopy images of frontal sections of the condylar process after 28 days of dynamic or static load application. Animals received calcein green (15 mg/kg, i.p.) injections on days 0 and 25 and were euthanized on day 28. Note the significant increase of the osteogenic activity shown as increased fluorescence in Dynamic Load group. 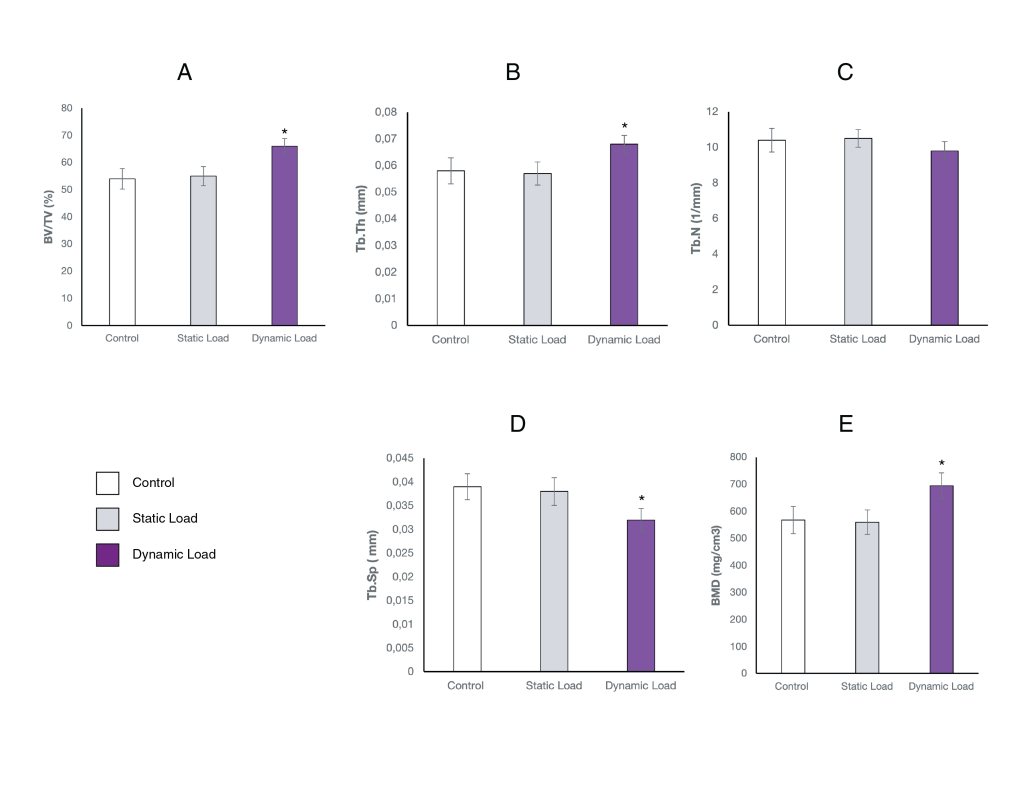 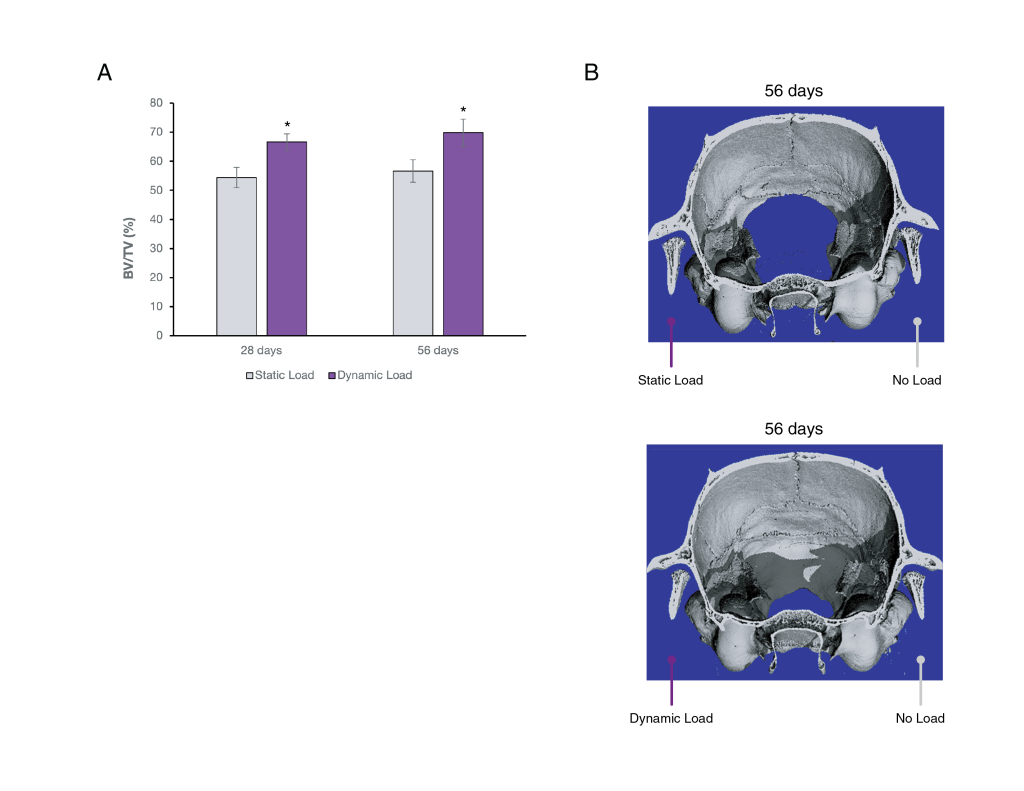 Figure 5: Osteogenic effect reached a plateau and was restricted to the side of load application. (A) Graph shows Bone Volume fraction (BV/TV) of animals that received static or dynamic load for 28 and 56 days. Each value presents mean ± SEM of 6 samples. * Statistically different from Static Load group. (B) 3D μCT reconstruction of the skull of rats that received dynamic, but not static, load on the right mandibular molars for 56 days show higher bone density in the condylar process closer to source of the load. 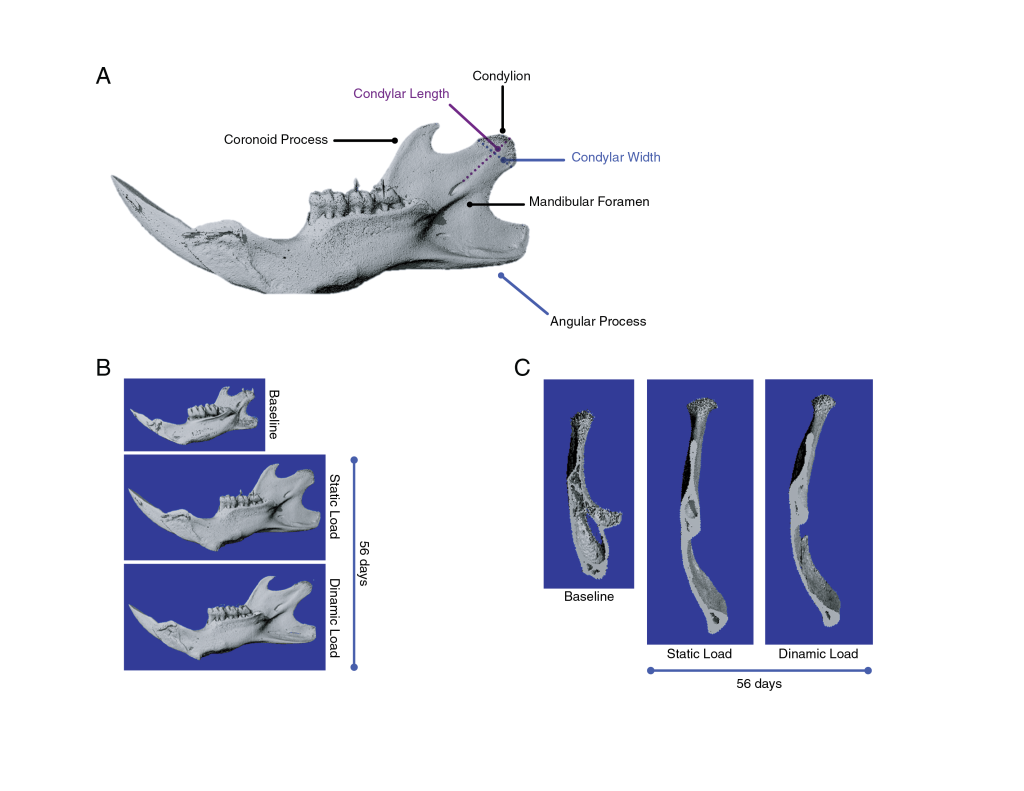 Figure 6: Effect of dynamic loading on condylar length and width. μCT 3D reconstruction images (A-C) were used to measure the length and width of the condyle, as shown in the schematic. Measurements were performed on mandibular condyles at Baseline (before initiation of experiment), and in Static and Dynamic Load groups at 56 days (D). Dynamic loading caused a significant increase in the length (B) and decrease in the width (C) of the mandibular condyles.

Table III. Effect of dynamic loading on condylar dimensions. Measurements of length, width and percentage of growth in each of dimensions compared to Baseline. Value represents the mean ± SEM of 4 animals. 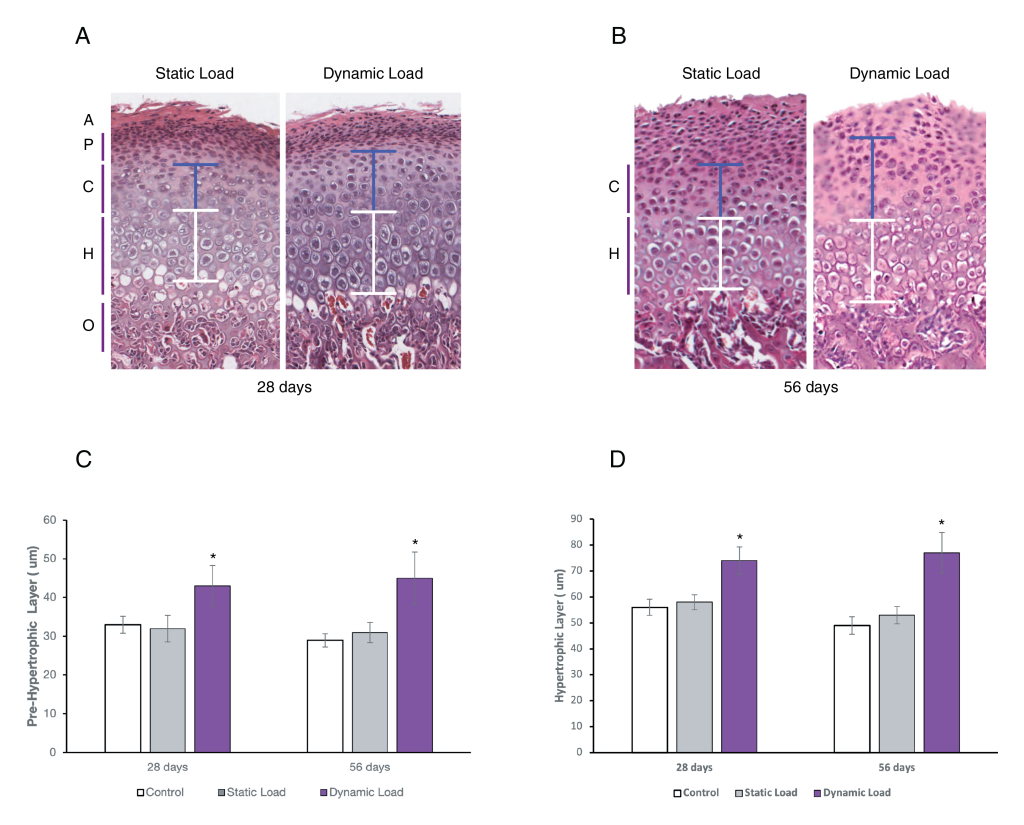 Figure 7: Dynamic loading induces changes in condyle cartilage organization. Hematoxylin & Eosin stained longitudinal sections through the condylar cartilage and bone show different morphological layers at 28 and 56 days (A, articular zone; P, proliferative zone; C, pre-hypertrophic zone; H, hypertrophic zone; O, chondro-osseous junction). Photomicrographs show the different zones in experimental animals that received static or dynamic loading for 28 days (A) or 56 days (B). The height of the pre-hypertrophic (C) and hypertrophic (D) zones in control animals that went through natural growth and animals that were exposed to 28 days or 56 days of static or dynamic loads were measure in photomicrographs of H&E stained sections. Values are mean ± SEM of 6 animals. 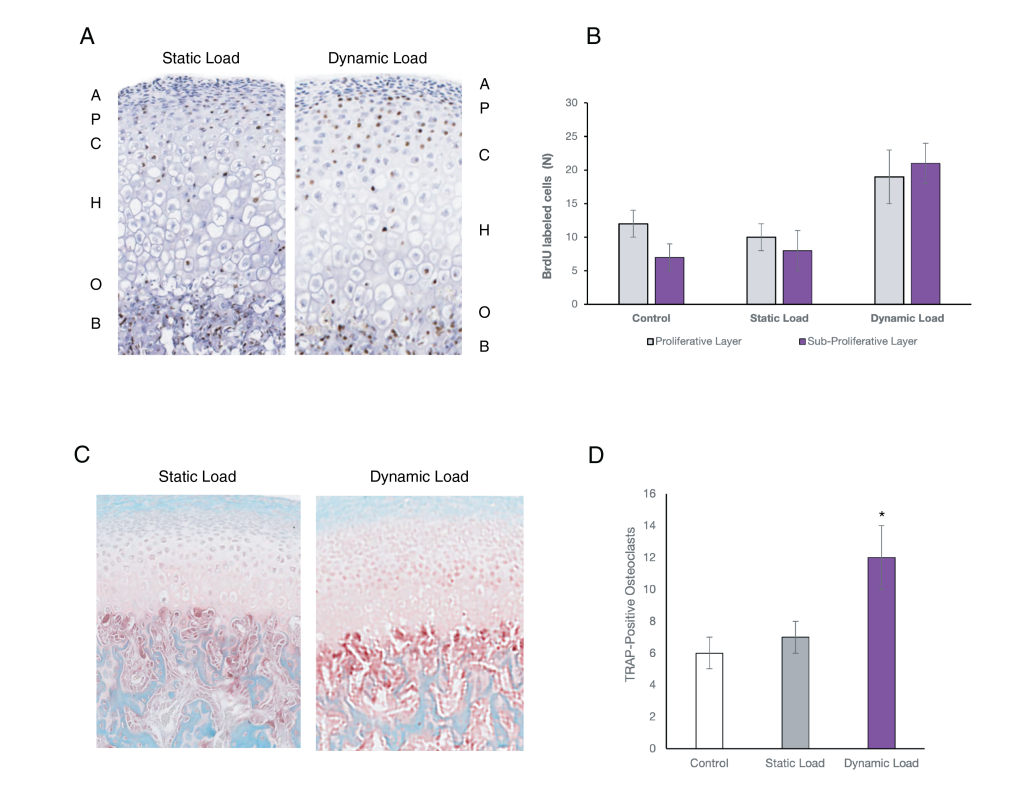 Figure 8: Dynamic loading increases condyle chondrocyte proliferation and osteoclast cell number. To evaluate the effect of dynamic loading on chondroblast proliferation, BrdU was injected 3 days before euthanasia of the animals. (A) Histological sections from mid-frontal area of condyle were immunostained to identify BrdU-labeled cells. (B) The number of BrdU-labeled cells was significantly higher on both proliferative and sub-proliferative layers (pre-hypertrophic and hypertrophic) in animals that received the dynamic load. BrdU-labeled cells were measured in a fixed rectangular frame in the middle third of mid-frontal condylar sections in 6 consecutive sections. Values are mean ± SEM of 6 animals. (C) To evaluate the effect of dynamic loading on osteoclast activity during endochondral bone formation, frontal sections of condylar cartilage were immunostained for TRAcP-5b and visualized as red cells. (D) The number of osteoclasts was measured in 5 consecutive sections of the middle third of condylar cartilage in a fix frame. Each value presents the mean ± SEM of 6 animals. * Significantly different from Control and Static Load groups. 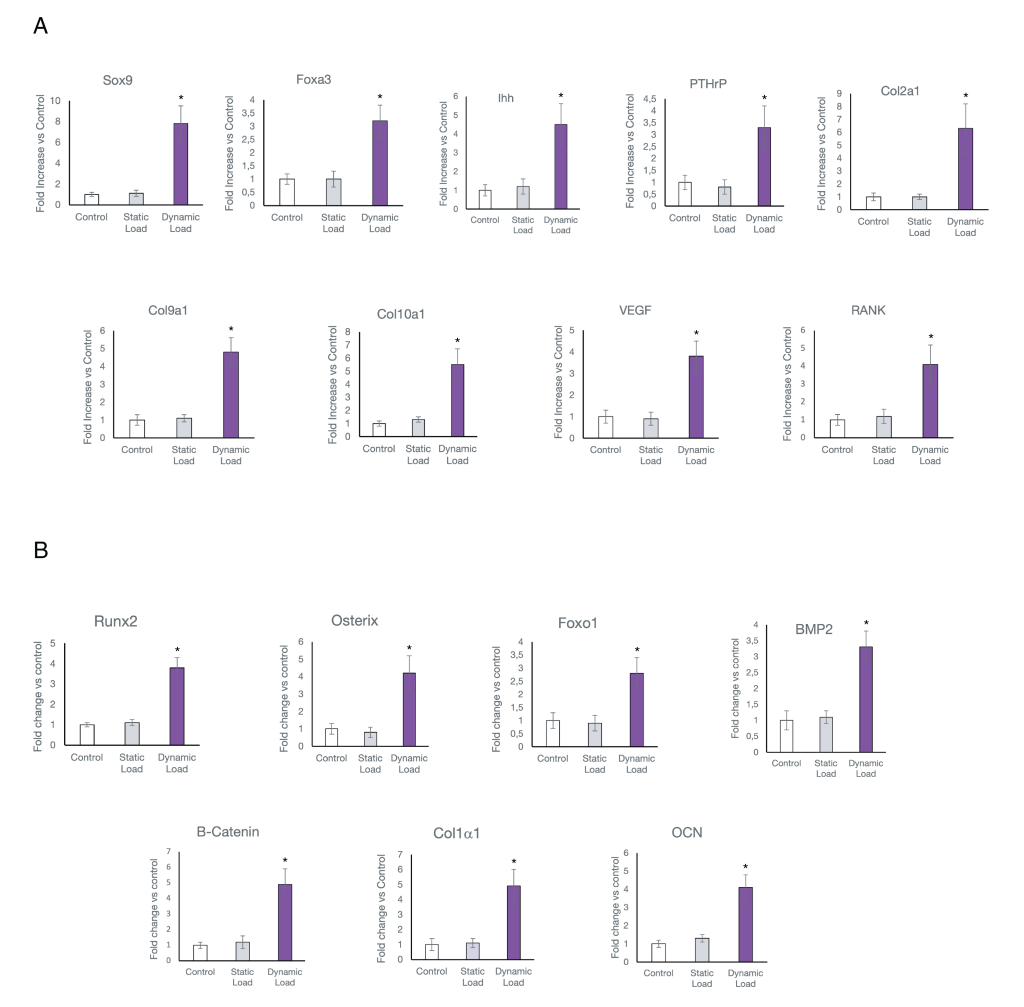